“We are thrilled to have Katherine join the UC San Diego family and advance gender equity in our health sciences research and practice” says Anita Raj, Professor of Medicine and Director of the Center on Gender Equity and Health at UC San Diego. “Today more than ever we need to ensure policies are inclusive and evidence based to ensure everyone in the US and globally can achieve their full potential. Katherine is one of those rare people who understands how to generate research and effectively support translation of the science for policy and decision makers.”

For the last eight years, Hay has been a Deputy Director at the Bill & Melinda Gates Foundation where she led work to evaluate large-scale health and gender empowerment programs and co-developed the foundation’s first Gender Equality strategy focused on improving gender data, research and evaluation on women’s work and enterprise in Africa and Asia, and scaling women’s collectives. Hay also developed and led the Gates Foundation’s Gender & COVID strategy which surfaced critical data on the gender impacts of the pandemic, bringing greater attention (and investment) on gender-informed solutions.

In addition to supporting strategic planning in Health Sciences, Hay will co-lead a $1.5 million grant to the university from the Gates Foundation to focus on gender equity in health and the health care workforce. “I’m so excited to be joining the UC San Diego community,” Hay said.  “I’ve seen the university’s commitment to gender and social equity research, and how they have doubled down during COVID, with a focus on intersecting vulnerabilities and systematic inequities. The opportunity to work on health and economic policies that matter, in California, Asia, Africa and globally – and make connections across borders and people, is a dream job for me.”

Throughout her career, Katherine has been a consistent voice for gender and equity in policy, research, evaluation, and change.  Named one of the world’s most influential people in gender policy by Apolitical, Hay has advised multiple major philanthropies, governments, UN and other global agencies on closing equity gaps. She helped foster new think tanks and institutions on gender and health in Africa and Asia, and established dozens of initiatives and investments resulting in enduring global research collaboratives, and hundreds of peer-reviewed publications, including several in leading medical journals such as the Lancet.

Hay was born in Quebec, Canada and received her Master’s degree in international affairs from Carleton University, Canada. She is married to hotelier and travel professional Nazir Rah, a native of Kashmir, India.  Together they have two teenage children. 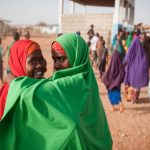